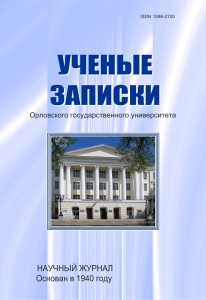 According to the Order of the Ministry of Education and Science of Russia No. 90-p dated December 28, 2018 based on the recommendations of the Higher Attestation Commission under the Ministry of Education and Science of the Russian Federation (hereinafter referred to as HAC), taking into account the conclusions of the relevant expert councils of HAC, journals included in the List of peer-reviewed scientific journals, which should publish the basic scientific results required for doctoral and candidate degrees (hereinafter referred to as List), by groups of scientific specialties, are considered to be on the List of scientific specialties and their branches of science.

10.01.03 – Literature of the peoples of foreign countries (with indication of specific literature) (philological sciences),

13.00.02 – Theory and methods of training and education (by areas and levels of education) (pedagogical sciences),

All manuscripts submitted to the editorial office are reviewed by leading specialists. The editorial has its own electronic address, abstracts of the journal are published in Russian and English. It is registered in the Federal Service for Supervision in the Field of Communications and Mass Communications, distributed by subscription and sold on contractual terms.

Scientific secretary of the Editorial board:

Technical Secretary of the Editorial board:

Rules of submission, review and publication of articles

Publication ethics of the journal